Internationalisation from both sides of the Atlantic: ARES hosts a networking meeting with a major US delegation 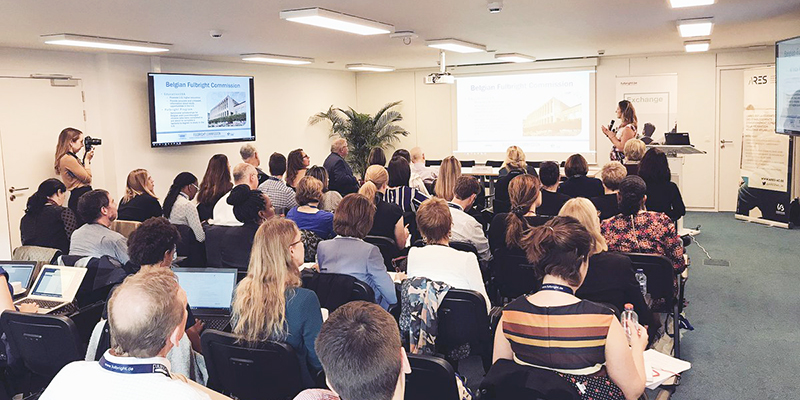 Some 30 representatives of US higher education institutions attended this Thursday 18 October 2018 a networking event hosted by ARES to discuss, with their Belgian counterparts and several European organizations, the internationalisation of higher education and research in Europe, as well as the future of partnerships between the United States and European countries, including Belgium.

A delegation of representatives of US higher education institutions (HEIs) met their Belgian counterparts as well as representatives of European institutions and organisations on this 18 October at ARES. This delegation is present in Belgium as part of a European visit organised by the Fulbright commissions of France and Germany. At the heart of the discussions: the challenges of internationalisation with and within the European Union.

Perspectives of internationalisation on both sides of the Atlantic

Two discussions took place in this perspective, organised by ARES in collaboration with the Fulbright Commission Belgium-Luxembourg and the Vlaamse Universiteiten in Hogescholen Raad (VLUHR).

The first one was on European perspectives on the internationalisation of higher education. International relations specialists working in HEIs or for European organisations, including Judith le Maire, Professor at ULB and Chair of ARES’s International Relations Committee of ARES, her Flemish counterpart, Peter Lievens, and Lesley Wilson, Secretary General of the European University Association (EUA) spoke with an assembly of about thirty US representatives and Belgian, French- and Dutch-speaking academics. The diversity of the floor allowed inspiring exchanges regarding the prospects for internationalisation of teaching and research from both sides of the Atlantic.

The second discussion focused on successful higher education and research cooperation projects between US and Belgian institutions.

This networking event is only one step in the program of the delegation which will be in Belgium until 20 October. During their European tour, the US delegates will also have the opportunity to discuss partnerships opportunities in the European Union under European programs such as Horizon 2020 or Erasmus.

The Fullbright Program is the flagship international cultural and educational exchange program sponsored by the United States Government. Created in 1946, it is designed to enhance mutual understanding between the United States and partner countries around the globe. It is considered one of the most prestigious exchange programs in the world, involving more than 160 countries.